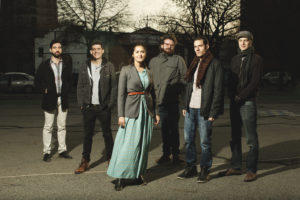 Phoebe Hunt & The Gatherers have debuted their song “Pink and Blue”, the second track to premier from their new album, with Relix.

Hunt says that “‘Pink and Blue’ is a reference to that hour of dawn, when you see the sky and recognize the magic and beauty that nature provides all around us every day–if only we are open to seeing it“.

“With a twang in her voice and her trademark energetic fiddling, Texas singer-songwriter Phoebe Hunt tells the story of a woman who is determined to make her own way in the world”