Tommy Castro’s new album, Stompin’ Ground is out now on Alligator Records and off to a strong start! It debuted at #2 on Billboard’s Blues Chart, at #10 on Billboard’s New Artist Chart and at #132 on the Billboard Top 200 Chart. Elmore Magazine raves: “… an hour of his best entertainment ever. With devilish guitar, and in a rich rasp that still raises the spirits, Castro drives his killer quartet through a set that celebrates the past with wide-ranging pizazz, and serious punch.” 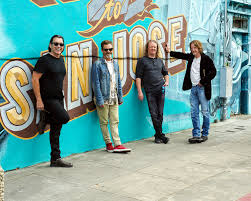 Guitarist, vocalist and songwriter Castro and the Painkillers – bassist Randy McDonald,keyboardist Michael Emerson and drummer Bowen Brown – have played hundreds of shows to thousands of music lovers, always leaving audiences screaming for more. All of Castro’s albums are filled with original blues, soul and West Coast rock. Each song on Stompin’ Ground shows a slightly different side of his multifaceted musical personality. Billboard says the band plays “irresistible contemporary blues-rock” with “street-level grit and soul.”

Tommy Castro is currently touring to support his new release and we are setting spring and summer dates now.