“Social concerns are built into her lyrics and compassion is at the forefront of her voice.” – NPR

“She Remembers Everything is the sort of lovely, literate work we’ve come to expect from Cash for more than 30 years.” – AP 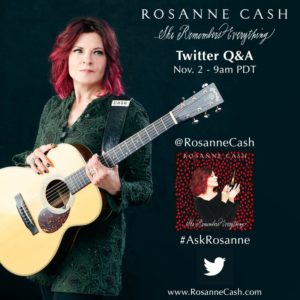 Rosanne Cash releases She Remembers Everything today on Blue Note Records. Cash comes back strong with the LP as her first record in nearly five years. New York Times acclaimed her ability to “find(s) mythic resonances behind everyday details.”

Rosanne will appear on Amanpour and Company later today for an in-depth discussion and performance of songs from the new album.  The program airs on CNN International and PBS.

She will also host a live Twitter Q&A at 12 PM ET today via her Twitter account. Cash is to be joined by album contributors Sam Phillips and Tucker Martine.

NPR Music calls the album “a deeply attentive song cycle,” representing the “image of a woman wielding her lived testimony,” and the title track “both a threat and a source of comfort.” 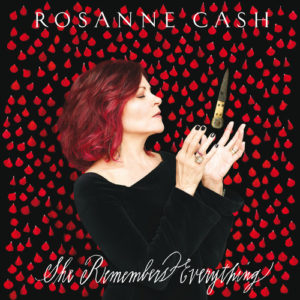 She Remembers Everything was recorded in Portland, OR and New York City, with Tucker Martine and John Leventhal respectively. The album boasts ten tracks all written or co-written by Cash, featuring contributions from Elvis Costello, Kris Kristofferson, Colin Meloy, and Sam Phillips; plus three extra tracks that appear on the deluxe edition of the record.

Cash plans to tour in promotion for She Remembers Everything, making stops in NYC, Chicago, San Francisco and more.

Listen to ‘She Remembers Everything’ here.

For more information and tour dates, visit her artist page.