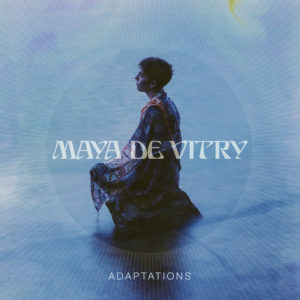 For Maya de Vitry, striking out on her own to write her debut album Adaptations was a metamorphic experience marked by liberation, exploration and deep personal growth. A member of the acclaimed string band The Stray Birds, de Vitry had long wanted to release music under her own name, but, as she explains it, had to summon both the “patience” and the “determination” to put her solo music out into the world.

“It really did take me a while to get to that place of confidence,” she says. “These songs were from a time of almost self-exile or something. Eventually, I began creating from a place that I realized would not fit in any context other than myself.” de Vitry stumbled upon such clarity by chance; in the summer of 2016 her flight to Nashville had been delayed, and de Vitry chose to spend some time at her grandparents’ cabin in Pennsylvania instead. She spent time writing, walking, listening to podcasts and brainstorming new projects. After writing numerous tracks for Adaptation, she brought them back to Nashville for her good friend and producer Dan Knobler. They took to the studio and solidified the tracks far sooner than expected.  “It was exciting,” she says. “I had crafted the songs and lived with them and really felt that they were strong and flexible and sturdy.”

De Vitry is a classically trained violinist with well-honed chops playing the fiddle, too. “But for this, I just wanted to play guitar and sing my songs. And I didn’t want fiddle on the record because I didn’t want it to be a bluegrass album, so Dan was like, ‘What about violin?’” de Vitry says, laughing. “Some of my earliest, most powerful musical memories happened to be in the orchestra, and when I heard my songs and my voice surrounded by strings and woodwinds, I was overjoyed, transported.”

Where the natural world inspires many of Adaptations‘ tracks, the album also has a deep sense of interiority. De Vitry cites the writing and recording of the album as a personally transformative experience, and the songs present her revelations about friendship, womanhood, freedom and love with great insight and vulnerability.

While Adaptations may be de Vitry’s first venture as a solo artist, it listens like the work of a seasoned artist with an impenetrable sense of self. De Vitry may have had to go it alone to make Adaptations, but these songs invite us all to join her on her musical journey for years to come.