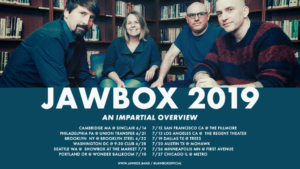 D.C.’s Jawbox has contemplated returning to the limelight for years, but 2019 finally felt like the right move. Bassist Kim Coletta admitted to the band’s’ back-and-forth regarding the decision: “…the hardest thing was just saying ‘Yes, let’s try this.’ I’m really excited and nervous at the same time.”

The post-hardcore quartet will commence their tour entitled “An Impartial Overview”, coined after a line from their 1996 song “Chinese Fork Tie” off of their self-titled record. The band reports that their setlist will cover albums Jawbox  and For Your Own Special Sweetheart.

Though the band split in 1997, the four have kept in contact and even have collaborated on projects. Frontman J. Robbins came to a realization that the reunion was inevitable, but needed to happen now or never. “If we’re gonna do it, we should do it when we’re still physically capable of doing it justice, of the endurance and physical commitment that it takes to play the kind of music we played in Jawbox.”

Jawbox hits the road on June 14th, starting at The Sinclair in Cambridge, MA. The reunion tour will entail 12 gigs throughout major U.S. cities.