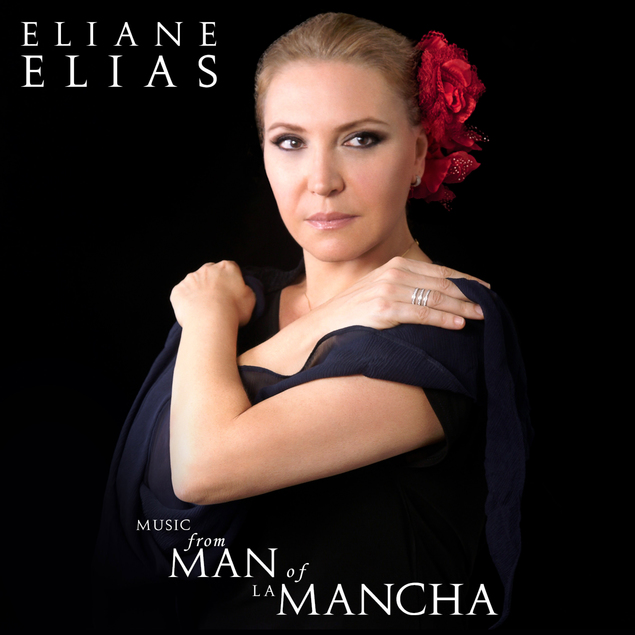 For Immediate Release – Following her 2015 GRAMMY®-winning Made in Brazil and 2017’s Latin GRAMMY®-winning Dance of Time, Eliane Elias returns with Music from Man of La Mancha, set for release on April 13, 2018, via Concord Jazz. Recorded with two different trios—one that finds the piano virtuoso accompanied by bassist Eddie Gomez and drummer Jack DeJohnette and the other featuring Marc Johnson on bass with Satoshi Takeishi on drums, with Manolo Badrena joining on percussion—the nine-track collection is a unique all-instrumental reinterpretation of songs from the legendary Broadway musical.

Dance of Time, which debuted at number one on two Billboard charts, the iTunes Jazz Albums chart and the Amazon.com Brazilian and Latin Jazz charts, and Made in Brazil, also debuting at number one on the iTunes and Amazon.com Jazz Albums charts, were recorded in Elias’ homeland. The back story for the new release adds another chapter to the prolific pianist-singer-composer-arranger and producer’s résumé: Although Elias has, in the past, recorded tributes to such giants as Antonio Carlos Jobim, Chet Baker and Bill Evans, Music from Man of La Mancha marks the first time she has put her own spin on a specific set of songs from a Broadway musical.

Elias’ 26th album in a highly distinguished career, Music from Man of La Mancha was recorded in 1995 and produced by Elias with co-production by Mitch Leigh, the late composer of the music for the original Broadway production.

Man of La Mancha premiered in 1964 and was inspired by an earlier, non-musical stage production, I, Don Quixote, itself inspired by Miguel de Cervantes’ 17th-century masterpiece Don Quixote.  Among the classic songs authored by Mitch Leigh for the musical was the oft-recorded “The Impossible Dream,” reimagined by Elias for this project.

The concept for the album came about, Elias recalls, when she was asked out of the blue to meet with the Tony Award-winning Leigh. The composer came to the musician’s New York apartment with a proposition: that he commission Elias to arrange, perform and record a new album of songs from the show. The Brazilian pianist, who had already been living in the United States for more than a decade, immediately warmed to the idea.

“Of course, I knew about the show, and was flattered when Mitch, who was accompanied by Neil Warner, the arranger for the original musical, chose me for the project he had in mind. He said he liked what I had done with the music of other composers,” Elias recalls. “I’d made a recording called Eliane Elias Plays Jobim and he was inspired by that as well as other things I had done.  He was taken by the way I treated songs and he loved the arrangements. He wanted me to do something like that with his music. He gave me a copy of the original Broadway cast recording and I chose the songs I felt I could create more around.”

Upon re-familiarizing herself with the material, Elias ultimately focused on nine pieces including “The Impossible Dream,” as well as the show’s title track and such favorites as “A Little Gossip,” “The Barber’s Song” and “It’s All the Same.” Each track bears Elias’ indelibly personalized touch. “This record is Brazilian/Latin/jazz,” she says. “It has all the elements together, which felt like a natural blend to me.”

Music from Man of La Mancha begins with back-to-back arrangements of “To Each His Dulcinea” and “Dulcinea,” the former featuring the Johnson-Takeishi-Badrena combo and the latter Gomez and DeJohnette.  “When sequencing the tracks, I thought it was a beautiful way to start by showcasing the two trios,” she says. Elias approached each arrangement differently, based on what the music said to her. “A Little Gossip,” Elias explains, “felt just perfect to be set within the Brazilian rhythm of frevo.  In general, arranging the songs was a combination of applying different rhythms, re-harmonizations, new improvisational sections, inventing completely new parts such as introductions, interludes, endings, using modulations to create color and overall momentum, lift and interest while staying true to the original melodies. Some of the songs have more Latin flavor; others have more of a Brazilian flavor. ‘The Barber Song’ is more like a Brazilian baião where I harmonize every note of the melody and freely play over the bar-line. ‘The Impossible Dream’ is a samba. Every tune has its own treatment. ‘What Does He Want of Me’ and ‘Man of La Mancha’ have a lot of interplay. There’s a lot of variety.  I really enjoyed preparing the arrangements for this recording because Mitch gave me artistic freedom.”

All of the music was recorded live in NYC’s Power Station Studio and it was mixed at Leigh’s Secret Studio in New York City. “For the most part, we usually ended up using the first take,” she says. “That spontaneity and freshness when you first record something is hard to beat. Of course, the musicians were prepared and rehearsed. My choices as to which musicians played on which songs were based on the type of arrangements that I wrote. I played to the strengths of each trio. It brought beautiful and varied interpretations, different feels and colors to the music by having two different bassists and two different drummers.”

Due to contractual circumstances, the album was not released at the time of recording, and Leigh has since passed away. Elias says that she was gratified to see how much Leigh enjoyed what she had done, saying, “I was thrilled to see Mitch’s excitement, enthusiastic approval, joy and delight with these arrangements and interpretations. Speaking from the arranger’s chair, it is the highest praise when the composer is enamored with the reimagining of his work.” Leigh’s children have stated, “Our dad loved this album, playing it for guests, with pride, but also when he was on his own, listening to it again and again. We all feel sure he’d be very proud it’s being issued for the public.”