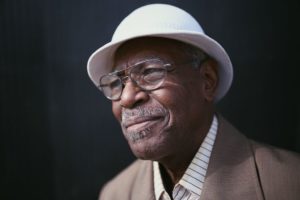 Don Bryant electrified the crowd at AmericanaFest 2017, and his show has been called one of the highlights of this year’s festival!

“But Memphis soul was really dripping Saturday night, when Don Bryant
delivered a 12th & Porter set, backed by Scott Bomar & the Bo-Keys,
that will be talked about indefinitely as a 2017 AmericanaFest
highlight.

“I love you! I love you! I love you!” the 75-year-old repeated,
between bouts of showing the kids how it’s done — with incredible
range and power —on spellbinding renditions of old nuggets (“Don’t
Turn Your Back on Me”) and tracks from his recently released album,
Don’t Give Up on Love, his return to recording after decades out of
the mainstream. The thrill of hearing him do “I Can’t Stand the Rain,”
which he co-wrote with his wife, Ann Peebles, was shared by every
goose-bumped listener in that crowded club.” —American Songwriter