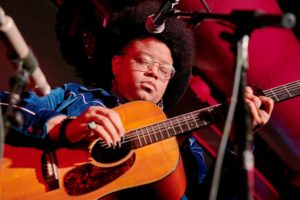 The annual GlobalFest held at the Copacabana nightclub near Times Square was lively as ever in the 12-act evening. Among the three performance stages were Amythyst Kiah, self-proclaimed “Southern Gothic alt-country blues” singer. As GlobalFest’s only solo act of the night, she accompanied herself throughout the set by alternating between acoustic guitar and banjo.

The New York Times praised her “deep-hued voice that can change on a dime from brushed steel to melted toffee,” claiming she could soon gain status as a blues master. Most notably, Kiah serenaded the crowd with “Darling Cora,” the traditional folk song made famous by B.F. Shelton. She discussed the song’s West African folk and English influences, her performance ringing true to its African kora roots.